P. and I are currently enraptured by ABZÛ, a video game journey through stunning ocean scenes filled with puzzles, myth, and wonder. 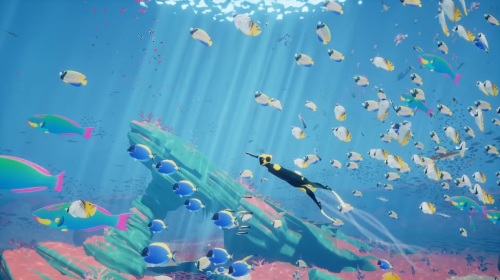 According to the game’s website, its “name references a concept from the oldest mythologies; it is the combination of the two ancient words AB, meaning ocean, and ZÛ, meaning to know.”

Despite its linguistic roots, the game depends entirely on visual storytelling informed by a score that is perfectly attuned to the tone of each section of the game. Exposition is revealed through hieroglyphics and a short holographic series of images. The first half of the game is mostly about discovery, whereas the second half focuses more closely on a simple and moving storyline that does nothing to impede on the game’s most impressive quality: wonder.

We were showing the game to a few friends last night. We each took turns navigating though the unique levels, audibly gasping at unexpected breaches from the water, and exclaiming in delight when we caught up with a Common Dolphin and were able to hold on while it swam through the rich orange kelp. There was no rush, no push to solve puzzles until we were ready. There was time to enjoy the world, to be filled with wonder.

Not to say that the game is always that laid back. There are rushing currents to ride, threats in the waters, and there is definitely something at stake in this ocean utopia.

In a market that seems to produce more and more games in order to satisfy the instant gratification culture that has taken root in North America, it is so refreshing to find a game like this. ABZÛ reminds us of the wonder that lies beneath the surface of our world, and the surface of our lives. Definitely worth playing, and playing again.