It’s been a full week of events, editing, and interviews!

Friday, I was happy to be a part of the “Amazing Adventures in Strange Lands” reading at Biblioasis. I got to meet Elly Blake, a best-selling YA author who also happens to be super nice! Christian Laforet and Ben Van Dongen, the superstar organizers of the event, also read! I always enjoy the human tension in Christian’s short stories, and Ben read one of my favourite parts of his cyberpunk novella, The Thinking Machine. The event was MC’d by Vanessa Shields, who added a lot of insight and humor to the evening. The Q and A following the readings involved the audience and brought up some interesting questions for all of us readers to speak to. All around a great event! 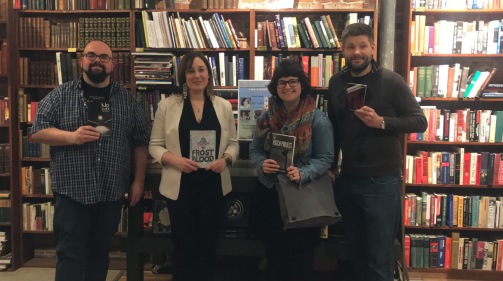 At the event, I met a couple of people who were there to record the readings for their podcast, All Write in Sin City.  They invited me out for an interview! Yesterday, we recorded some segments, also featuring Elly Blake and Alexander Zelenyj! It was a bizarre experience, in that I’m used to being on the other side of table. I co-hosted Hardcover: A Literary Podcast for two years, so answering questions instead of asking them was a mind-twister for sure! I enjoyed hearing Elly and Alex’s insights on writing and fiction, and was impressed by Sarah and Irene’s interview skills – Not an easy thing to compile a bunch of information and research into conversational questions!

And today is the day (I hope!) where I finally finish my final draft of my work in progress. Editing this book has been a nourishing creative experience. Taking my rough ideas and smoothing them out brings a sense of satisfaction and wholeness that I didn’t feel with my first book. So it’s new and exciting and I’m hopeful that it’ll turn out well.

For the next four Thursdays, I’ll be featuring a different book by a local author – and they’ll be featuring The Patch Project! It’s our version of a book exchange-style blog tour, and should be a lot of fun!

First up is Ben Van Dongen, with his new cyberpunk novella, The Thinking Machine!

The Thinking Machine follows an outsider named Zed, a new arrival to the massive metropolis that spans most of the Eastern seaboard. The purpose of his visit is to hunt down a machine who, strangely, shares his name. A cyberpunk novella infused with Zed’s personal sense of mythos, this tale of humanity’s relationship with technology is full of suspense and intrigue.

It reads like a detective novel. Zed follows leads, passing through the less frequented corners of the bustling city. Ben Van Dongen’s cities are usually gritty and unforgiving places, riddled with back alleyways and dangerous doorways. This city is no different. The distinct locations of each scene create an impressive thematic atmosphere. Zed’s impressions of the city and the intermittent thoughts of his home in the forest, along with references to why he entered the city in the first place, really put muscle on the bones of this story for me.

The beginning of the book includes a couple of stereotypical side characters you would expect from an 80s dystopian film like Bladerunner, and there is a lack of multi-dimensional female characters. Until Belle, that is. I found that the interactions between Zed and Belle kicked this story up a notch, and created another layer of tension.

Also of interest is the implant which Zed receives in the city. I asked Ben about the role of technology in this book. “I write a lot from the hip,” he replied, “so the implants came from me thinking it was a neat idea that could push the story forward during an early writing session for the book. The idea of mechanical and technological prosthetics terrifies me. I am excited for the possibilities for people who need them, but when fake eyes out perform real eyes, how long will it take before people opt to get the new tech? Will that keep the people who don’t want augmentations behind? It’s a personal fear that I can see on the horizon.”

Overall, The Thinking Machine is a well-paced and engaging read. I’m really excited to see what Ben writes next! 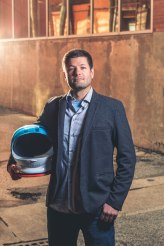 Ben Van Dongen was born in Windsor Ontario. He likes to think that if he tried harder he could have been an Astronaut, but he is happier writing science fiction anyway. He co-authored the books No Light Tomorrow and All These Crooked Streets, and is one half of the founding team of Adventure Worlds Press. You can read more crazy notions on his website BenVanDongen.com

First of all, The Patch Project is now available in all ebook formats as well as in print!

I really enjoyed the one we did for the Kindle release back in March: it gave me the opportunity to meet some other EDGE authors who stopped by, as well as to give my friends a glimpse into the story behind my novella. This time, I’m hoping to engage with readers who are new to the book and writers who are interested in genre fiction! Stop by and ask me anything!

I’m also going be part of a blog tour starting Thursday, July 19th. For the next four Thursdays, four authors will be featuring each other’s books through interviews, Q and As, and creative what ifs. Check back here on Thursday for the first post featuring Ben Van Dongen’s new cyberpunk novella, The Thinking Machine!